and it’s a great place for taking photos.

Last but not least, there was the youngest (that I know of) in the performing group. She’s 18 months old and I think her name is Lilly.

There was an entire fleet of fairies at the fair (that makes sense, doesn’t it?) (or is she a faun? confusing because she has wings, but she also has horns.)

Other types of ladies were there, too

What else? Let’s see. A falconer, Mistress Mary, Someone who dressed up for the occasion (a time traveler, perhaps?), and B, who came to take photos, too.

At the end of every Cracker Trail Ride, there’s a parade in Fort Pierce. At least, this year, I made the parade. Would like to have caught up with the group as the horses and riders made their way across the state. Maybe next year.

Florida Cracker Cowmen got their name because they cracked their long whips to herd up the cattle.

The Florida Cracker Association takes to the trail annually, and camps at ranches along the way…

Appeared they had a fine time, ending up at the bar, horses and all.

I love this fair. And, since I lived less than a block away, I could walk down and follow its progression. Wish Lake Worth did more of this kind of thing. The only festival I have loved better was the Luggage fair in San Francisco, an unbelievable conglomeration of street performers and acrobats who were walking up and down the sides of buildings…

Monday 4 October 2010: i didn’t know this. I saw this on zillow with other haunted houses, and since this is convenient and close by, it’s a good haunted house to know about for a Halloween visit.

The Stranahan House was one of several structures built between 1893-1906 along the New River in Fort Lauderdale, FL, by Frank Stranahan (photo).

Frank arrived in 1893 to operate a barge ferry across the river. Soon, he was running other businesses: a trading post, post office, bank and hotel.

He married school teacher Ivy Cromartie and built her a home right on the New River in 1906, the Stranahan House, which still stands today as the oldest remaining structure in Broward County.

This is also where Stranahan’s story turns grim. He suffered from depression and his mental health could not endure a hurricane that devastated his businesses, or the financial effects of the Great Depression.  Stranahan committed suicide on June 23, 1929 by strapping a large iron gate to his ankle and throwing himself into the New River.

There are many reports of Frank Stranahan’s ghost in the Stranahan House, as well as the ghost of Ivy Cromartie. Other ghostly presences include six family members and the apparition of an Indian servant girl near the back of the home. The Stranahan House is now open to public tours.

And then there are a whole series of ghost videos. here’s one and will take you to the others.

Thought this would be a good place to put this.

My mom had a black swan that she’d talk to. Pauly, he came with the farm. It was a sad day when he died…

My sisters bought my parents two white swans, for their anniversary, I think, but they flew away. Life is short!

So many wonderful things about living here. It’s 6:30 a.m. and the birds aren’t awake yet. Wonder what I will hear this morning?

Here are some adventures I’ve had this spring… To think I thought I had to go to Chartres to walk the labyrinth! There are two right here in Delray Beach and they are based on the Chartres Labryrinth.

At the Duncan Conference Center, you can enjoy them at your liesure, or be part of monthly guided meditations.

These two were envisioned by retired Duncan Center director, Father Steve Fregeau, and were designed by landscape artists, Steven and Michele Benner. A labyrinth, they say, is a symbol, a tool, a passion, or a practice, which can provide gentle relief, meaningful purpose and quench the desire for calm, insight and peace. I walked the labyrinths on World Labyrinth Day, May 2, as part of a worldwide effort to create a “rolling wave of healing labyrinth energy in unison as the earth turns.”

Actually, it was a very peaceful and centering experience. Different from a maze, a labyrinth has no forks in the road or confusing dead ends. A unicursal, the path never crosses over itself and culminates in only a singel cul-de-cac — its center — where “walkers” are invited to rest awhile, meditating, centering, quieting, before taking the same path out.

I learned that on life’s path, I cannot get lost. It may turn and seem confusing at times, but the way is distinct, and like Theseus, the thread is there, and all you have to do is walk along.

Friday 24 April 2009 – We took a day trip to Sebring this winter. All of us enjoyed the day, and we had fun taking photos at Highlands Hammock State Park.

The park was established in 1935, and is one of the four original state parks created by the Civilian Conservation Corps. It is part of Florida’s Statewide Greenways and Trails System.

On 9,250 acres, It has a dense, subtropical jungle of hardwood trees, cabbage palms, ferns, bromeliads, orchids and other airplants.

Due to the diversity of the plant communities, many varieties of wildlife are found here including Whitetail Deer, River Otters, Pileated Woodpeckers, Red Shouldered Hawks, Barred Owls and Swallow-tailed Kites. Florida Panthers, Bobcats, and Bald Eagles may also be seen on occasion. I, however, only encountered a spider…

Thursday 27 November 2008: I went with my friend, Carol, on an overnight photo shoot to Homestead Miami. We were on a mission, so to speak. I had visited a Nike Missile site years ago, and wanted to return for photos. I had only a general idea of where it was. Thanks to our Bed and Breakfast hostess, whose exhusband had worked on one of the Nike sites, we were able to locate it.

Since this was spur-of-the-moment, it was too late to get permission from the state, and we wondered if we would get arrested for trespassing.

Carol, who is the smart one, brought some cash for bond money, just in case. As it turned out, though, the place is a favorite spot for paint ballers and, at its entrance, was a hot dog stand!

Our mission for this day’s “shoot” was to photograph derelict buildings… Here is a link — http://ed-thelen.org/loc-f.html

And a short bit about the Nike Missile Program — During the height of the Cold War in the mid-1950s, the U.S. Army began building the bases, which were to be the last line of defense against an enemy air attack. Rings of these bases, or batteries, were built in rural farmland around major metropolitan areas. The bases had two sections, separated by a half mile and sometimes in different towns. One section was the Control Area with radars and computers, a mess hall and administrative building. The other section was the launch section, where missile components were received and assembled. Once assembled, the missiles were fueled and stored in underground magazines. Both sections had barracks. The bases were guarded and operated around the clock.

The program was deactivated in 1974, but continued in some of the Florida bases through the 1970s.

I’m not sure that touring and photographing a missile site is for everyone, but we enjoyed the outing, as we visited other picturesque (non-missile) South FLorida sites as well. For those of you who have made a reservation at my vacation rental in Lake Worth and want to go on this day trip, I suggest that you make an early start and get there before the paint ballers. It’s also a good idea to call the State Parks and Recs ahead to ask for permission to visit the site.

What was the location where the Nike Missile base was where the photos were taken?

Check out that link! As of today, the Nike Hercules missile base located in the Everglades is offering guided tours!

The site I visited originally is near Krome Detention Center.

Its been awhile but me and some friends used to ride 4wheelers out to the homestead site around 98,99.I have old papers from there that we found,mostly old blue prints,don’t know what they are but I thought they were interesting.I looked at the base on google maps and it looked like most of the buildings were torn down exept the missile silo,the last time I was there we went down in the missile silo,we went down about 150ft and could see the bottom 15 to 20ft of the bottom was water.it was very interesting out there and hope to return one day.

The pictures are th former Nike site (D Battery) that is now the Krome Avenue INS Detention Center. It is located on US 27 (Krome Avenue) a couple of miles south of US 41 (Tamiami Trail)west of Miami. It was built in 1965 following 21/2 years in a tent following the CUban Missile Crisis. The only missiles there were the Nike Hercules of which 25% were nuclear-tipped. The photos are of the Administration area where the administration, mess hall, and domrotories were, and the IFC radar area.

About a mile closer to US 41 is the INS Detention Center whch was the launch area. The missiles had to be several thousand yards away from the missile tracking radars so it could keep up with it and update the calculated trajectory in comparisom to the incoming aircraft or missile.

The second missile site that has been referenced is A Battery which is located in Everglades National Park another 15-20 miles south and west outside of Florida City. It is open for tours January through March effective Janaury 2009 on a scheduled appointment through the park.

I just photographed the towers at the 216th street site. I am not certain what they are yet but local legend say this was a Niki Missile base. Both Battery A and Battery B were temporarily located near Florida City prior to be combined in their base in the Everglades.

All the information states the two Batteries were say they were locates 8 miles South and West of Florida City in a tomato field. So I am thinking these 4 towers are for something else. The property is currently being used as a church and I am going to try and gain access for better photos of the remaining structures. 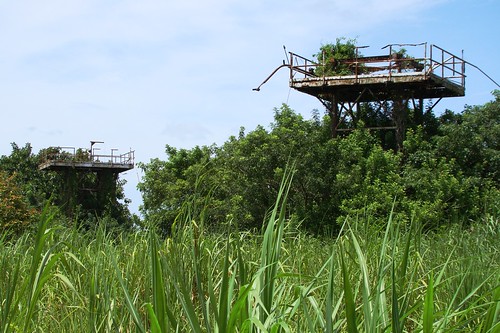 The site is at the corner of SW207th Avenue and and SW 216th Street.

I have gotten word back that this was “Either C or D Battery, 3rd Battalion, 68th Air Defense Artillery”. You can see comments on the photo here:

The site is owned by a religious non profit group and I am going to write them a letter (no email address or phone number) to attempt to gain access to the site without trespassing.

If you are planning a trip to the site North of Black point, I am afraid there is not much left there:

While the basic road structure is there, everything else is bulldozed.

here is a good site for some reference points:

Also, To be accurate the missile base you shot above is not in Homestead. It is west of Miami and designated as HM-95. Homestead is another 20 miles south. This base is now “shut down” The DOD is really picky about anyone going in there now.

If you want a long Bike ride: