My trip to curacao

Think about a street in Amsterdam with narrow three-and-four-story buildings topped with gabled roofs and baroque sculpted curlicues. Now paint them in a rainbow of luscious tropical colors, add galleries with shuttered arches, and transplant the whole strip into the Caribbean. What you have is picturesque Punda, the oldest district in historic Willemstad, the capital of Curacao.

Facades in terracotta, turquoise, lime green, grapefruit, mellow yellow and flamingo pink, trimmed out like gingerbread and crowned with red-tile roofs, all reflected in the sparkling waters of Santa Anna Bay, there’s nothing like this visual treat anywhere.

But legend has it that the buildings were not always colorful, says tour guide Maja Atalita. “They used to be white, but an early governor told everyone to paint the facades in different colors because the sun reflecting off the white gave him headaches.

“Guess what?” she says. “It turned out he owned stock in a paint factory.”

The beauty of the architecture, coupled with Curacao’s commitment to keep it that way, is why Willemstad was designated a World Heritage City by the United Nations Educational, Scientific and Cultural Organization (UNESCO) in 1997, sharing that distinction with the likes of the Taj Mahal, the Cathedral of Notre Dame and the Grand Canyon.

Here’s a little bit of background information: The largest of the ABC Islands (“A” is for Aruba and “B” is for Bonaire), Curacao is 38 miles long and no more than seven-and-a-half miles wide. Located 40 miles north of Venezuela, it is part of the Kingdom of Netherlands and home to 150,000 people from 50 nations.

Curacao was discovered by Alonso de Ojeda (a lieutenant of Columbus) in 1499. The first Spanish settlers arrived in 1527 – it was they who shipped off the native Arawak Indians to other islands – and when they didn’t find gold, they dubbed Curacao one of the “useless islands.” The Dutch took it over in 1634, via the Dutch West Indies Company. Curacao was to be used as an agricultural colony, but it lacked enough fresh water. However, it did have deep water and natural barriers surrounding its ports, so instead, Curacao became a major slave depot, with Willemstad hosting merchant ships under every flag imaginable.

Within 70 years, Willemstad’s busy trading center, Punda (point), was full to overflowing, so building expanded across the Saint Anna Bay to Otrobanda (the other side) in the 18th century, followed by the development of Pietermaai and Scharloo in the 19th century. Together the districts create a unique collection of European colonial structures that depict 300 years of multi-cultural evolution.

It took half that time for Curacao’s early Dutch architecture to adapt to the climate, says Willemstad architect Anko van der Woude. 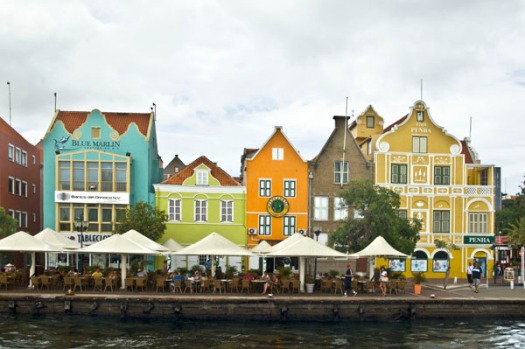 In Punda, look at the Penha building. Built in 1708, it was one of the last to be constructed in that district, he says. “On the top of it, you have those European baroque curls. If you go to Amsterdam, you’ll see those curls, which were made by stone carvers. In Willemstad, local builders copied them and made them from lime plaster.”

In Holland, clay is plentiful, so bricks were used as a building material. “But coral stone is Curacao’s natural stone, so, that’s what we used, and since it’s porous, we plastered over it.”

While sash windows worked fine in Holland, they were impractical in Curacao. Over time, to keep the sun out and let breezes in, galleries with archways were added on the front and back facades. Then, to block out the rain, which blew horizontally because of the trade winds, louvered shutters were added within the arches. By 1720, arches gave way to wooden lintels, which were easier to build.

“The plaster, galleries and shuttered windows made our architecture completely different from Holland’s,” van der Woude says. Also, Punda’s streets became alleyways, thanks to those seven-foot gallery extensions on the front and the back of the buildings, he adds.

Referring back to Penha, notice that the decorated top gable was possible because of the saddle roof, he points out. “The Dutch were not used to living in the tropics and they made mistakes. In Holland, saddle roofs, which are pitched for snow, made room for attics with dormer windows.

“But that type of roof is too hot for here. People saw that they couldn’t live in the attics, and after 1865, they built hip roofs instead. The hip roof has less of a pitch, and heat was collected within the space between the roof and the ceiling of the room below. Small windows in the eaves allowed for heat ventilation, and that made the rooms beneath cooler.”

While Punda was densely built within city walls, the newer developments were not walled in, and people made use of the room by building larger homes where hip roofs and front and back galleries became the norm. In the countryside, galleries were built on all sides of the plantation homes (landhuizen).

Structures of note within Willemstad include forts and bridges. In Punda, Fort Amsterdam (dating from 1635) houses the Governor’s palace, the Fort Church and government offices.

Opposite each other at the mouth of the bay are Rif Fort in Otrobanda (constructed between 1826 and 1828) and Waterford in Punda  (constructed between 1826 and 1827). At one time, a heavy chain stretched across the channel (between the fronts of Fort Amsterdam and Rif Fort) and prevented invaders from entering the bay, Atalita says, “and the Plaza Hotel Curacao (situated within Waterford) is the only hotel in the world that carries marine collision insurance.”

There’s an old story about the picturesque 551-foot pontoon bridge, Queen Emma Bridge, better known as the Old Swinging Lady, Atalita adds. “A foot bridge designed in 1888 by an American, Leonard Burlington Smith, originally a toll was charged to those who could afford shoes. Poor people borrowed shoes so as not to be embarrassed, and the rich crossed barefoot. That’s how it became free for everyone.”

The majority of Curacao’s population is Afro-Carribean, with sizable minorities of Dutch, Latin Americans, Asians, French and Portuguese, as well as a small Jewish community. As such, there are two museums that tell the story of slavery, Kura Hulanda Museum in town, and Landhuis Kenepa near Knip. While the Jewish population is small, it’s significant. Leaving Portugal and Spain for Holland during the Spanish Inquisition, they came to Curacao to conduct business because they could speak Dutch, Spanish and Portuguese. Completed in 1732 and on the site of a previous synagogue, their place of worship, Mikve Israel-Emanuel, is the oldest synagogue in continuous use in the Americas. In addition, the Scharloo neighborhood consists of delightful houses built by early Jewish merchants and shop owners. Other museums housed in historic buildings include the Maritime Museum and the Curacao Museum.

But don’t worry about trying to see every historic monument in town, since there are more than 700 protected buildings. It’s the entirety of the place that makes the impression, anyway.  And with many restaurants, hotels and museums housed within those architectural delights, visitors are afforded the opportunity to come inside and take a look.

While enjoying the atmosphere, grab a bite to eat at the old market, or snap photos of the floating market, a colorful flotilla of boats laden with fruits and vegetables that come every morning from Venezuela. Take a break for a variety of activities, as well. For sports, there’s golf, tennis, scuba and snorkeling. Sunbathe at one of Curacao’s 40 pristine beaches. Visit the ostrich farm, Senior Curacao Liqueur Distillery and Den Paradera, an organic herb garden. At the Curacao Sea Aquarium, get in the water and feed sharks or swim with dolphins.

Where to stay? Curacao’s boutique resort with 15 accommodations, the luxurious Baoase with its own lagoon, beach and mini island, offers guests dining pavilions for two and villas with private pools.

For other upscale dining, Bistro Le Clochard juts out from Rif Fort and offers an outstanding view of Punda; Restaurant & Café Gouverneur de Rouville overlooks the bay and is next door to the beautifully restored Kura Hulanda, and St. Tropez on the ocean in Peitermaii is alive with music. And then, drive out to visit the landhuizen and see the countryside. Hike in Christoffel National Park, and walk out to view the dramatic seascapes at the National Park Shete Boka.

UNESCO’ World Heritage program, adopted in 1972, catalogues, names and conserves sites of outstanding cultural or national importance to humanity’s common heritage. There are almost 1,000 sites included on the World Heritage List. UNESCO calls the architecture of Willemstad a “European colonial ensemble in the Caribbean of outstanding value and integrity.

“The city’s historical architecture is of a strikingly genuine and colorful European origin set in a tropical environment. Nothing like it can be found elsewhere in the Dutch West or East Indies.”

Getting listed by UNESCO was a joint process, says Anko van der Woude.  “When we started working toward the designation in 1985, we calculated that we needed $250 million to restore the buildings. At this point, maybe 60 percent are restored and we are still $100 million short.”

The funds for redevelopment and preservation are provided by the Island Government of Curaçao, the Government of The Netherlands and the private sector. The Curaçao Monuments Foundation, the Willemstad Urban Rehabilitation Corporation and the Curaçao Housing Foundation also have budgets and funds for financing their restoration and building projects.

“In the early 1960s, buildings began to deteriorate fast,” Van der Woulde says. Prosperous families, escaping the heat, had already moved to outlaying suburbs and the old family homes in the city had been rented out. They were costly to maintain because of termites, the fact that coral stone attracts salt, and leaky gutters encourage rot, he explains. “Incoming rents did not cover the cost of upkeep and within 25 years, the buildings were completely dilapidated.” Which is around the time when he became involved with Curacao’s conservation movement. Born and raised in Curacao, van der Woude studied architecture at Delft University Netherlands. When he returned to the island in 1984, he began conducting tours as a hobby, which he continues to do. As a restoration architect – his firm is IMD Design – he and his associates have restored a number of historic buildings on the island.