This weekend, for Live Oak’s kiln opening and sale, I went out to Justin Lambert’s home and studio to see how that all worked.

The photo he had on his site of the kiln looked interesting, a kind of cross between Noah and the Whale and … I’m not sure what.

I had no idea what he was talking about, soda, fire, whatever, and so, I had to go to see for myself. Here’s what I learned…

Lambert doesn’t like glazing his pottery. So, he’s developed a clay body that vitrifies after being fired in his wood-burning kiln for 76 hours — the heat saturates through the clay, making it very strong.

The effects he produces on the surface of his pieces has to do with controlling the way the heat and ash go through the kiln, as well as the way he and his team load the kiln.

Then, they take a piece of wadding (sort of looks like a hot-dog wreath, and glue it with Elmers to the bottom of a mug, for example, and they place that on top of a dish, and that creates different designs depending on the type of pieces that they are loading in, as well as the way the flame and the ash are moving across the surface, marking the work.

Every time they do such a firing, they keep careful documentation of what works and what doesn’t: when they start firing the kiln, when they are stoking it and how much air is going in and out.

As I said before, it goes on for 76 hours and the team has to stoke it, throwing in bundles of wood (like you’d see at Publix sold for the fireplace) every five to eight minutes. They end up using two to three cords of wood.  They rotate the four people on the firing crew and they also have a team of assistants to bring them the wood bundles, etc.

Realize, too, that it took them two days to load the kiln, so that they could get all the pieces positioned properly for the effects they were after.

“We want to block the flame from going right though the kiln and when it’s bouncing around inside, that’s how we get the different colors,” Lambert explained.

Here are some of the finished pieces, showing a variety of coloration and markings.

Lambert won’t be having another kiln opening until March, however, you can go to his ETSY site to see his work, pricing and to purchase. Click here.

This day, potter Fong Choo was on hand, so I had the good fortune to learn what he does, too. 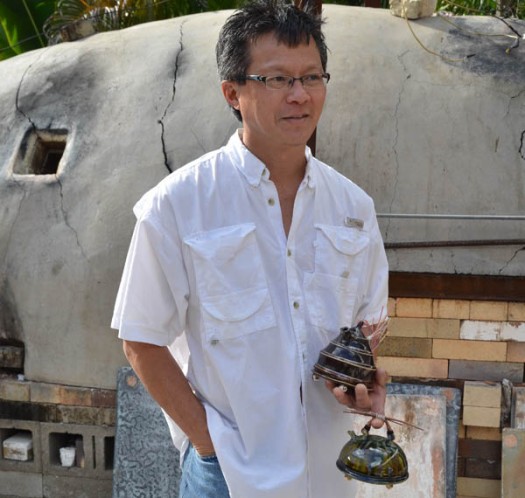 He’s originally from Singapore, and lives in Louisville, Ky. He studied business in college, and fell in love with clay when he took a class in pottery. He currently has a show at the Lighthouse ArtCenter in Tequesta.

Now, he does something totally different from Lambert. Here’s what he said (and by the way, he fires his pieces in an electric kiln: “I fire my glazes at lower temperatures. And then I overfire them to a much higher temperature, causing overmelting, which creates jewel tones.

To get the effects he’s looking for he does endless hours of testing, and his forms have depressions that are designed to catch the overrun.

The handles that you see in these photos are his new idea and latest endeavor. Since he’s getting ready for the Smithsonian Crafts Fair (April 2012, Washington D.C.) he’s playing with ideas.

“I make teapots for a living,” he said. “In Singapore, tea drinking is a way of life. Traditionally, potters make these little teapots — Yixing. But I’m not one of those potters, however their work inspires me.”

Choo will soon be going to teach at the Torpedo Factory.

Here’s a link to Choo’s site, where you can see his work and prices.

And here’s a link to the show he’s presently in at the Lighthouse ArtCenter.